Despite our best efforts, it’s incredibly challenging to remain at peak health throughout the year. Between illnesses, accidents, and simple misfortune, it’s relatively easy to suffer a complication that keeps you or a loved one out of the workforce for some time. If you’re injured or become ill due to workplace conditions, it’s likely that your injuries fall into the category of workers’ compensation (or workers’ comp). Workers’ comp replaces a portion of a wounded employee’s payroll wages and covers their medical expenses after an accident.

States have their own specific requirements, regulations, and laws that define the workers’ comp system under their jurisdiction. The rules and payment thresholds are determined by the state’s insurance regulators. Our team took a closer look at the overall wellness and workers’ comp situation in Connecticut. We developed a deeper understanding of the injuries and illnesses affecting workers in the state, as well as the number of cases and payout figures on an annual basis.

What Are Occupational Injuries, Illnesses, & Diseases?

To begin, we’ll discuss the types of harm that can befall an employee at their job. Some injuries are instantaneous, such as a worker being harmed by a defective piece of machinery on a factory floor. Other injuries take months or even years to be detected but can have a significant impact on the victim’s quality of life. For example, a construction worker may be diagnosed with lung cancer or mesothelioma after years of exposure to asbestos at different worksites.

Which Age Group Suffers Most From Occupational Illnesses in Connecticut?

Perhaps not surprisingly, the age groups that bear the brunt of occupational illnesses throughout the year are those aged twenty-five to sixty-four. As of 2019, just over 80% of Connecticut’s workforce fell into this age range. With relatively fewer workers younger than twenty-five or older than sixty-five in the workforce, it stands to reason that those age ranges would have fewer documented cases of illnesses.  Arranged in the chart below are cases of occupational illness in Connecticut in 2019, categorized by age range. Data is drawn from the North American Industry Classification System (NAICS).

Due largely to complications of the ongoing Covid-19 pandemic, data on workplace illnesses for 2020 and 2021 has not been fully peer-reviewed and approved yet. However, we can look at data gathered from as recently as 2019. According to the Bureau of Labor Statistics (BLS) and Connecticut Department of Labor (CTDOL), there were roughly 1,700 reported instances of occupational illnesses in 2019. As displayed below, Connecticut had approximately 200 less reported occupational diseases in 2019 than in 2018. In both years, no cases of workplace-related poisonings were recorded. To remain faithful to the original data collection methods, we defined musculoskeletal disorders as “other,” as BLS does. 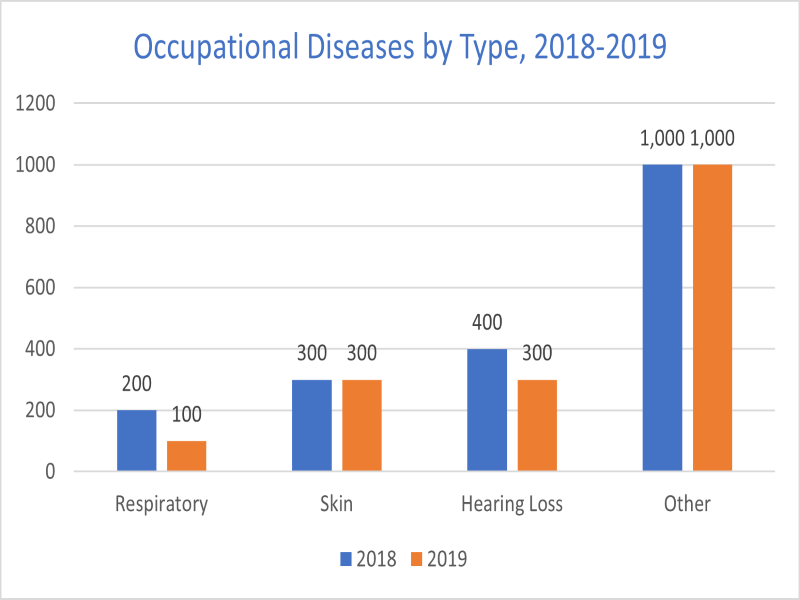 Exposure to Infectious Diseases in the Workplace

Unlike occupational diseases, which trended downwards from 2018 to 2019, contraction of and exposure to infectious diseases in Connecticut workplaces rose by 9%. In 2019, there were 1,063 reports of exposure to bloodborne pathogens. This marks a 6% increase from 2018, and these incidents accounted for 81% of statewide infectious disease reports.

In recent years, court decisions have expanded the definition of “compensable disease” via workers’ comp in Connecticut to include exposure. This helps injured workers secure the medical treatments they need to recover, without fighting a prolonged battle to prove that the first report of injury was not simply exposure to a disease but contraction of symptoms. 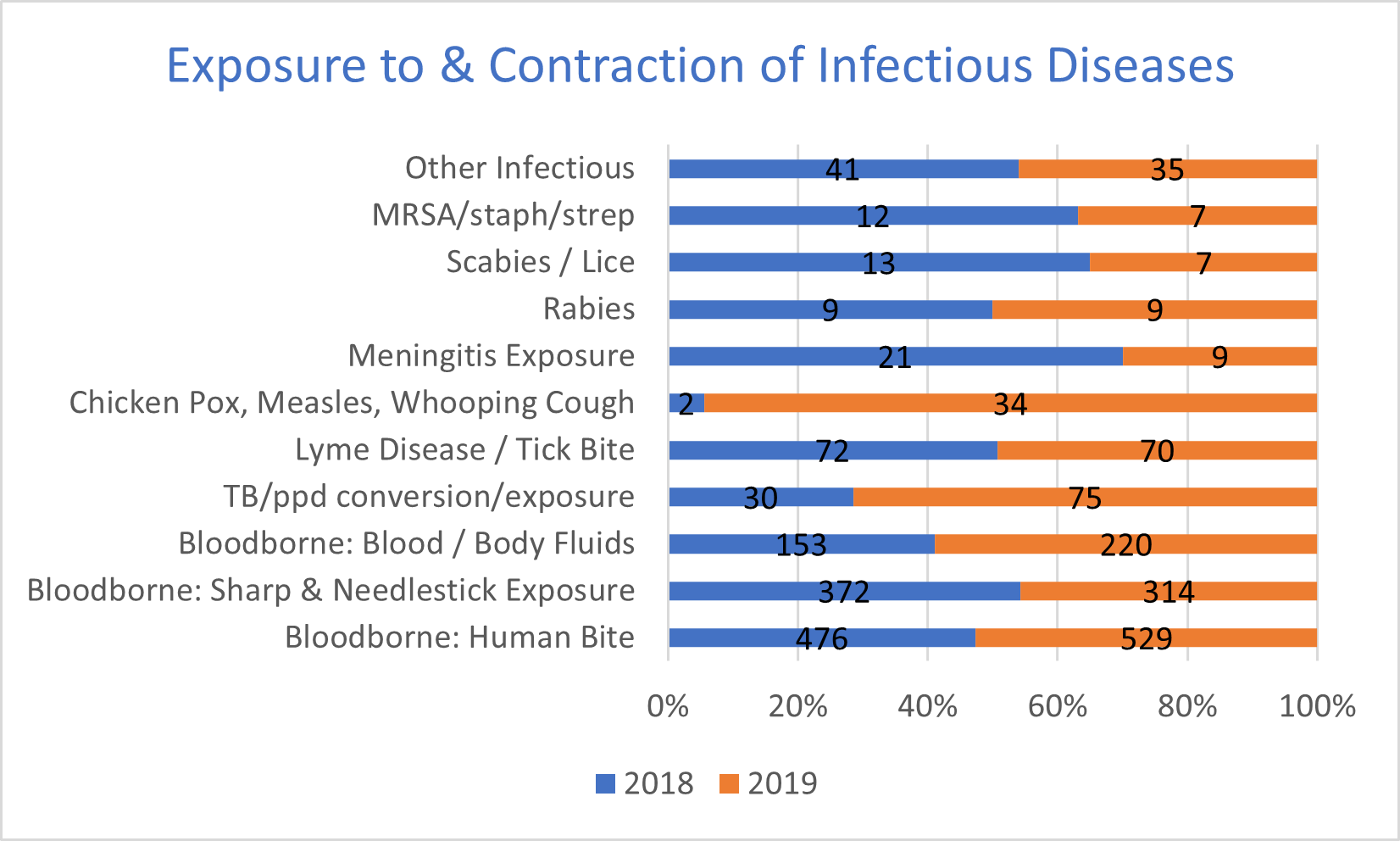 Non-Chronic Respiratory Poisonings & Injuries by Cause 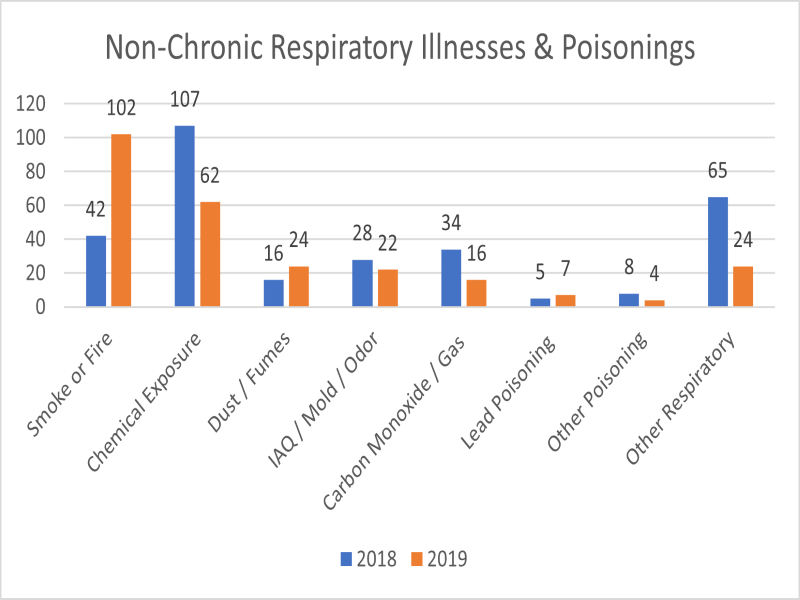 What About Chronic Lung Conditions? 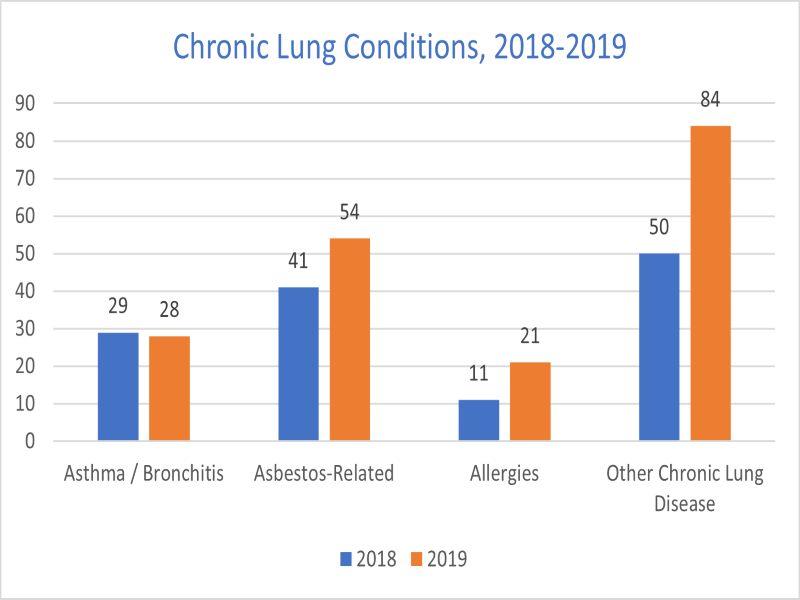 While catastrophic workplace accidents are what many people think of when they hear the phrase “workers’ comp,” there are a number of other conditions that can detrimentally impact one’s life. We’ve tracked some of these injuries and complaints from 2018 and 2019 in the graph below. 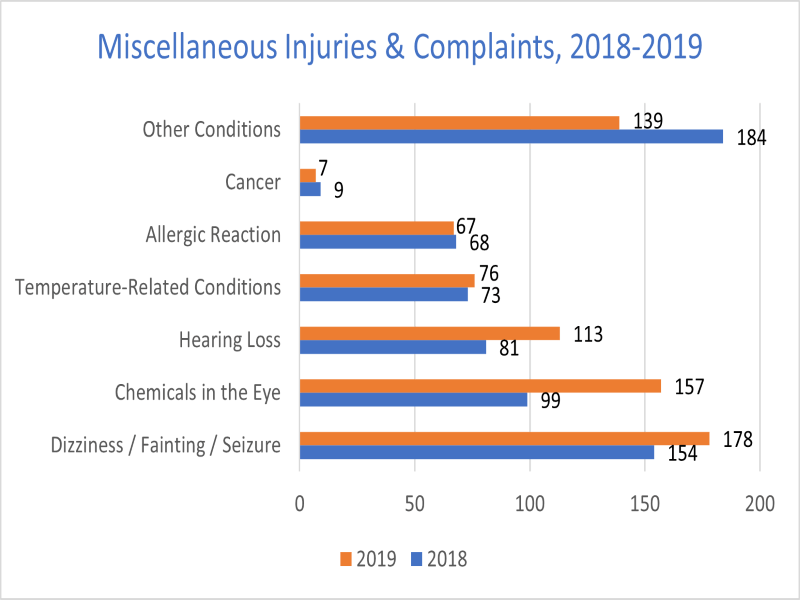 According to Connecticut’s 2020 Survey of Occupational Injuries and Illnesses, private industry employers reported 33,300 nonfatal workplace illnesses and injuries throughout the year. The resulting incidence rate of 3.0 cases per 100 workers was subsequently substantially higher than the national rate of 2.7. Two Connecticut supersectors, “trade, transportation, and utilities” and “education and health services” accounted for 67% of the occupational illnesses and injuries. 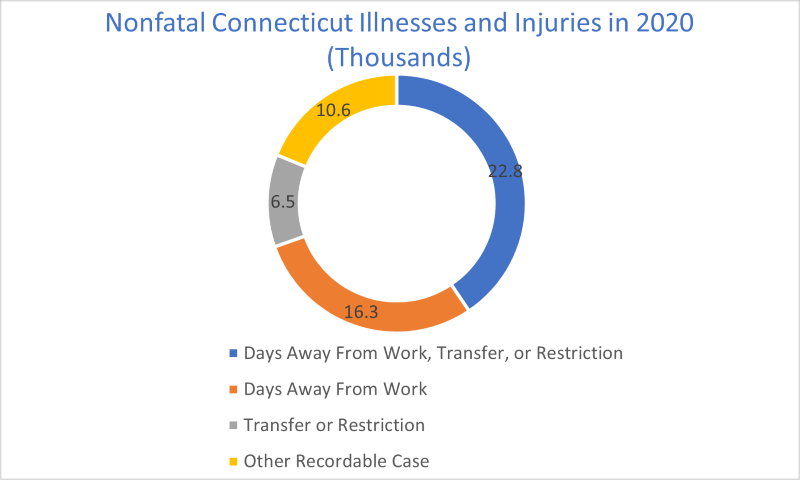 In 2020, the most recent year for which data of this nature is available, the BLS reported twenty-nine fatal occupational injuries in Connecticut. Twenty-seven of these deaths occurred in private industries. The chart below details the cause of death and victim’s age range. The totals may not add up to twenty-nine if a victim’s age or cause of death was not determined. 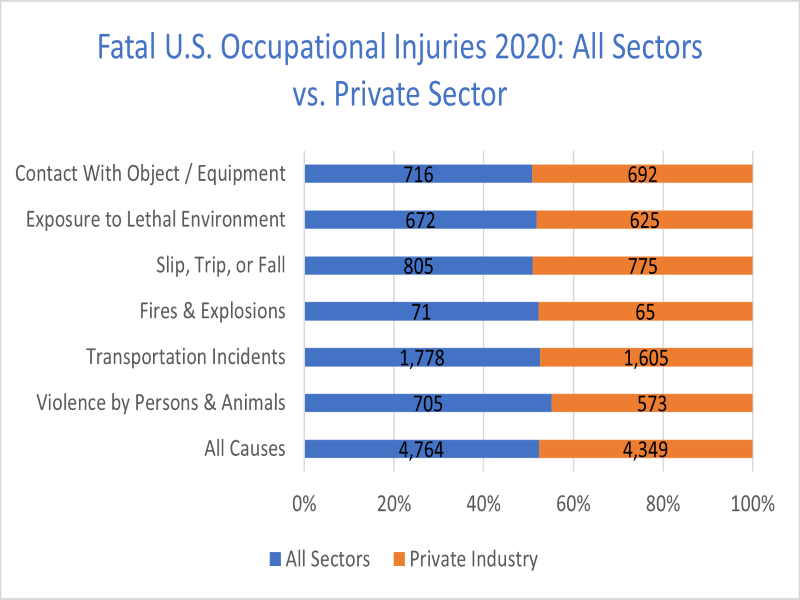 How Many Connecticut Workers’ Compensation Cases Have Been Filed in 2022?

This article is originally being written in March of 2022, so complete data on workers’ comp cases for the calendar year 2022 is not yet available. However, the Office of Workers’ Compensation Programs (OWCP) has released the following data, which is accurate through March 6th, 2022:

Suffering an injury can be terrifying and stressful, particularly if you’re harmed at your place of employment. If you, a friend, or a loved one are harmed, try to follow these steps: