It started in 1918 with a personal injury case.

Israel Jacobs, back from his Army service in France, sat in his new law office in New Haven with his feet up on his desk. His brother-in-law, Billy Frank, walked in with an elderly black man whose wagon had been struck by a car. This was the first case for the first lawyer in the long line of attorneys named “Jacobs” in New Haven.

Izzy’s practice grew rapidly, and he specialized in the trial of criminal cases. He quickly became a leading attorney in New Haven. True story: The Bijou theater was showing a movie where the leading man got into trouble with the law. A voice from the balcony boomed out, “Get Jacobs!”

In 1947, Howard, the oldest of Israel’s three sons, joined his father in the practice of law. Middle son Stanley joined the firm in 1950 after graduating from law school. In 1957, youngest son Dick became part of the firm—now called Jacobs, Jacobs, Jacobs & Jacobs. The law firm was known throughout Connecticut for its skill in trying cases, particularly for personal injuries. The firm had great success achieving high jury verdicts and settlements for its clients.

After Israel’s death in 1963, the Jacobs brothers continued in the practice of law, both together and with other partners. The next generation of Jacobs lawyers began in 1977 when Stanley’s son Bruce joined the firm. Bruce’s wife, Irene, began practicing law with Stanley and Bruce in 1986.

Stanley and Bruce Jacobs gained acclaim for achieving some of the highest verdicts in personal injury cases in the history of Connecticut. In Mather v. Griffin Hospital, a boy sustained severe brain injury at birth due to the negligence of the hospital and its personnel. The boy’s family, on the advice of Jacobs & Jacobs, declined the hospital’s offer of two million dollars to settle the case. The final result from the jury verdict was an award of over $10.5 million. 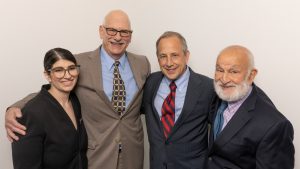 Another significant case for Stanley and Bruce Jacobs was Ryder v. Amtrak. Kevin Ryder, a 30-year-old railroad lineman, was working on power lines after a train derailment when he suffered severe electrical injuries resulting in the loss of both hands. The railroad offered $1.8 million to settle the case, which was rejected. A crucial witness in the case was an expert on artificial limbs who testified about the lifetime costs of artificial hands, taking into account future advances in technology. The final jury verdict award for Kevin was $5.35 million, the largest personal injury verdict ever in Connecticut at the time.

An interesting side note to the Ryder case: the victim, Kevin Ryder, used some of his settlement money to enroll in law school. Kevin received his law degree and then practiced law for several years with the Jacobs & Jacobs firm.

Dick Jacobs’s son Steven began practicing with his father in 1985. Both now practice with Bruce in the firm of Jacobs & Jacobs. Steve Jacobs says he made the choice to become a lawyer at the age of three! He realized that his father was a lawyer, his uncle was a lawyer, and both of his grandfathers were lawyers, so he didn’t think about doing anything else. He wanted to carry on a tradition that he still values today.

In 2014, Irene Jacobs left Jacobs & Jacobs when she was appointed a Connecticut Superior Court judge. The same year, Bruce and Irene’s daughter, Allison, joined the firm to add the fourth generation of the Jacobs family to New Haven’s legal community. Allison practices with her great-uncle, her uncle, and her dad. The Jacobs legal tradition continues.

2018 will be the 100th anniversary of the Jacobs family practicing personal injury law in New Haven. As they move into the next 100 years, all the Jacob lawyers exemplify the standard set by Israel Jacobs from the start: a family firm where clients of all backgrounds feel comfortable and valued.